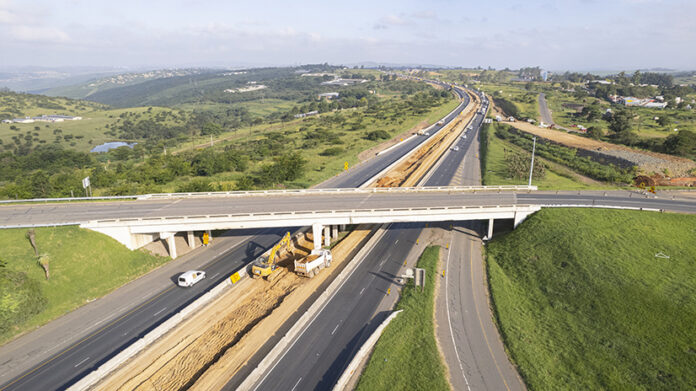 KEEPING the goods flowing between the port of Durban and the powerhouse of Johannesburg has always been a basic pillar of South Africa’s economic life; current roadwork on this vital corridor is hoping to streamline traffic and boost trade.

Since April 2021, JSE-listed Raubex Construction has been active on a 4 km stretch from Dardanellas to Lynnfield Park. The project is a major overhaul of the road surface, with the addition of two – sometimes three – lanes in each direction. Bridges are also being widened and a completely new twin-spine, road-over-road bridge is going up over the R603 route.

According to Raubex contracts manager Abri Lubbe, the widening of the bridges at the Umlaas and Sunnyvale underpasses has been completed, as has an agricultural underpass. The work has included the construction of abutments, the application of precast beams, in-situ decks, balustrades and end-blocks.

“The twin-spine bridge at the Umlaas Road junction – which is a three-span structure – is underway,” says Lubbe. “Work began on this bridge in October 2021, and piling has been completed to allow for the foundations to begin; it is due for completion by the end of 2023.”

Roadwork on the southbound lanes is getting underway, says Thys Greeff, construction manager at Raubex, as the contraflow arrangement for traffic frees up this side of the highway for construction work.

“Excavation takes place to between 1000mm to 600mm, and this is filled with blasted material from AfriSam,” says Greeff. “The next level may comprise a 150 mm capping layer and a 300 mm G6 selected layer, followed by a 350 mm stabilised sub-base layer of crushed material.”

Roadstab – AfriSam’s specialised road stabilising cement – is being supplied in 50 kg bags to the Raubex subcontractor for adding to the sub-base layer. By the end of the contract, around 180,000 bags of RoadStab – or some 9,000 t – will be used.

The readymix supply will come from AfriSam’s nearby plant at Umlaas Road, says AfriSam regional sales manager Randal Chetty. More than 300,000 tonnes of construction material, including unselected fill, blasted G6 material and 20 mm aggregate have been supplied to date.

With the scale of the numerous upgrading projects on the N3 placing pressure on local suppliers, Chetty says AfriSam’s quarry at Pietermaritzburg will be able to provide back-up supply where necessary.

“Serving this project – alongside others in the area – demands meticulous planning to ensure that the required blue and brown material is always delivered,” says Chetty. “On the readymix side, for instance, we have already begun stockpiling the 20 mm aggregate and river sand, for when project demand is greatest.”