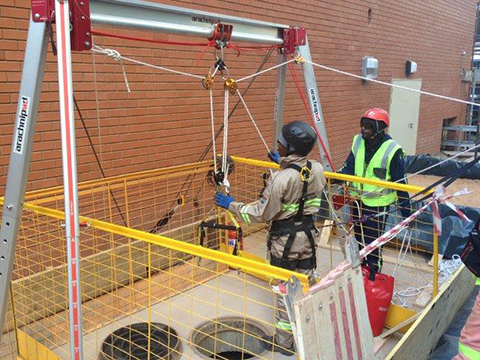 THE Ingula pumped storage scheme in the Little Drakensberg escarpment in KwaZulu-Natal was recently the setting for a rope access inspection described as one of its trickiest yet by the company contracted for the job.

Ingula consists of an upper and a lower dam, each capable of holding about 22 million cubic metres of water. The two dams are 4.6 km apart and are connected by underground waterways that pass through a subterranean powerhouse with four 333 MW generators.

To generate electricity during times of peak demand, water is released from the upper dam, passing through the pump and turbines into the lower dam. During periods of reduced energy demand, the water is pumped from the lower back to the upper dam.

Periodic inspection of the four units by specialised structural, civil or mechanical teams requires rope access and confined-space standby rescue. Both of these services were provided by rope-access specialist Skyriders after being awarded a contract for all four units in 2020, according to Marketing Manager Mike Zinn.

“The fact that the specialists themselves do not necessarily have any rope-access experience means that Skyriders deploys some of its highest qualified and most experienced technicians to provide the necessary assistance and access.

Zinn describing Ingula as one of the most challenging industrial environments Skyriders has been involved with to date.

He said the contract also marked a significant extension of the inspection, repair and access work his company has carried out for electricity utility Eskom over the years on its power-station fleet.