Transport sector takes a knock over the 3rd quarter 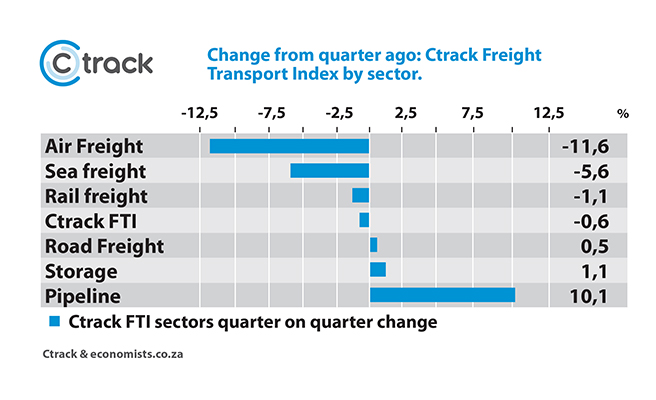 INTERNATIONAL supply chain problems and local attacks on the logistics infrastructure have had a negative impact on the entire transport sector during the third quarter of 2021.

This was reflected in the Ctrack Freight Transport Index, which declined by 0,6% compared to the previous quarter.

Hein Jordt, Managing Director of Ctrack SA, said this decline would in turn probably be reflected in the overall third quarter GDP, which is due to be released in early December, as transport is a co-incident indicator.

“While the increase on a year ago is a very respectable 8,9% (but down from an adjusted 11% the previous month) for the whole industry, one must not forget the low base that this represents as South Africa was then bouncing back from the multi-decade lows experienced during the 2nd quarter of 2020.”

He added that the world’s supply chain breakdown is clearly visible in the decline of Air Freight and Sea Freight.

“As the main methods of transport in the global supply chain, the declines in these sectors were to be expected. It is no longer strange to hear of ships that are delayed for over five weeks as they need to wait for freight to be loaded and then again when they need to offload at their destination”.

Air Freight declined by 11,6% while Sea Freight declined by 5,6% in the 3rd quarter. “The latest speculation reveals that wealthier industrial nations are using cargo planes to help relieve the pressure on the ports and assist critical manufacturers awaiting components.”

He said that since the onset of COVID-19, the impact on Air Freight and international passenger transport had been immense and that normality was only expected to return in 2023.

“Complex product manufacturing has been the hardest hit by these supply chain disruptions as solving one supplier shortage exposes the next product shortage. Some factories are literary a stop and go situation which causes further delays downstream.”

While the international portion of the Freight Transport Index clearly displays the global supply chain delays, on the local front, there are numerous additional problems surfacing and resurfacing.

“The onslaught on business in the transport sector is relentless, with supply chain and criminal elements the biggest contributors to stunting any possible growth. To top that all, a massive fuel price hike is also imminent,” Jordt said.

South Africa continues to experience attacks on infrastructure. Recently Transnet reported the theft of 130km of cable in the four weeks ending on the 22nd of October. This is in addition to another 322 incidents of damage to infrastructure such as actual rail, signals, stations, and level crossings.

The Road Freight sector too remains under attack, with reports of at least 22 trucks being destroyed during the month of October. Damage to pipelines causes regular delays in that sector, while frequent leaks in the main pipeline between Durban and Gauteng mean that contractors have been appointed on a permanent basis to clean up fuel spills.

Furthermore, unexplained fires in some Ports show that the Transport sector is very vulnerable to sabotage.

“It is in times like this that a business simply cannot operate without a dedicated tracking and fleet management partner that has eyes on your moveable assets, 24/7.”

IN a major milestone for women in logistics, transport and supply chain, 95 women recently graduated with an international qualification in logistics and transport. This...
Read more
Events