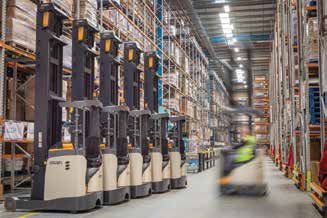 FOR the second year in a row, Goscor Lift Truck Company (GLTC) has won the Summit Award, the most prestigious honour bestowed by Crown to its top independent dealer of the year.

Traditionally, Crown has always recognised the outstanding performances of its company-owned branches. Three years ago, the company extended the awards to include its independent dealers worldwide.

Crown manufactures a variety of electric and internal combustion lift trucks and components in 19 facilities throughout the world. Product sales and service are handled by the company’s network of Crown-owned and independent dealers located in key markets. Dealer and sales personnel are factory-trained in all disciplines and backed by advertising.

At the inaugural awards in 2018, GLTC was the co-winner of the 2017 Ascent Award, which recognises branches and dealers that performed well and “are continuing to move towards the summit”. A year later, the Crown dealer for southern Africa was at the “summit” of the OEM’s dealership standards globally, walking away with the Summit Award for 2018.

“This is an international award which puts us against some top European dealers. To be recognised by the best manufacturer of electric forklifts in the world as its best dealer speaks volumes of our capabilities, which sets us apart in the southern African landscape,” said Patrick Barber, Sales Director at GLTC.

“There are numerous aspects considered. Market share is obviously one of them – particularly growth and maintenance of market share in specific product categories. Of greater significance is parts holding as well as training and development. To give an idea, we are the only dealer in the world that has a Crown-accredited training centre.”

SUPPLY chain efficiency is important to keep the country moving forward. So much so that 60 percent of respondents in global studies suggest that...
Read more
Business Management

By Mark Wilson: CEO SYSPRO EMEA&I DATA is the backbone of any manufacturing enterprise. With continuous supply chain disruptions, the allure of data and business...
Read more