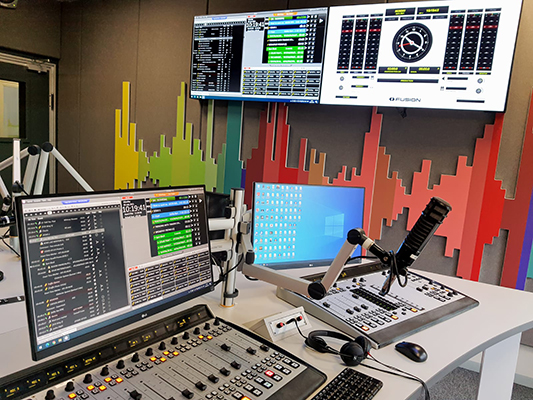 A major technology upgrade for East Coast Radio’s on-air studios is paying significant dividends, with its on-air studios now not only free of frustrating faults, but also future proof.

That’s according to the Reghardt Rautenbach, Managing Director of KVMTech, the company contracted in 2018 to supply and install electronics and cabling for the station’s studio rebuild.

“KVMTech’s solution proved its ROI in a very short period. It has been maintenance- and trouble-free since installation, and its longevity, scalability and flexibility continue to contribute to the station’s profitability four years down the line,” Rautenbach said.

He added that East Coast Radio’s solution needed to be simple, time-efficient and flexible, catering to the requirements of a multitude of systems from IT to broadcasting, overseen only by a small technical team.

Reuben Baatjes, IT and Broadcast Technician at East Coast Radio said the upgrade had proved transformational. “We previously had layers of wires littering our server room, causing confusion when one of the hard-to-identify extenders failed, a regular occurrence before the upgrade.”

He said that the failures would limit the DJs ability to carry out their tasks and, on occasion, result in station blackout. “We would remain ‘silent’ for as long as the equipment repair demanded.”

DJs had to contend with multiple keyboards and computer mice, which affected their productivity.

“KVMTech’s solution not only solved our connectivity challenges, but their single-console control (one mouse, one keyboard) with multi-monitor workspaces created more efficient internal processes. This has resulted in a flexible, convenient and easy-to-use studio, which improved DJ productivity and positively affected listenership ratings.

“Considering the time saved from a human resource perspective, and zero maintenance or repair expenses to date, there is no doubt that the ROI for this aspect of the studio upgrade has surpassed the initial investment,” Shozi added.

Rautenbach said that while all products in the KVMTech range are warrantied for a minimum of 36 months, this does not give full justice to the product and equipment longevity.

“Our equipment hardly requires any maintenance, and it is extremely rare for any repairs to become necessary before at least 10 years have lapsed,” he said, citing examples that include a national television broadcaster and regional radio station. The TV broadcaster returned to KVMTech for an upgrade 10 years after initial installation, and the radio station has been running a KVMTech solution for 15 years without any hiccups to date.

How to plan a production line move

AS a leader in industrial automation, OMRON has extensive lines of control components and equipment, ranging from vision sensors and other input devices to...
Read more