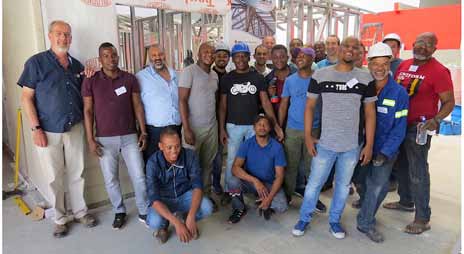 THE growth trajectory and increase in the popularity of light steel frame building (LSFB) in South Africa has been nothing short of remarkable.

That’s according to John Barnard, Director of the South African Steel Frame Association (SASFA), a division of the Southern African Institute of Steel Construction (SAISC).

“The growth in the popularity of LSF construction locally is due to its inherent innovation, and to the fact that it reduces building costs, in a number of ways,” Barnard said, adding that a major advantage of LSF building is that a structure takes much less time to complete than a similar brick and mortar building.

“As the construction team can finish the outer shell of the building in a much shorter period, work on the inside of the building (completing internal lining, ceilings, tiling and painting) can get underway much earlier – as can the installation of services (water and electricity).”

In addition, having the outer shell completed earlier means that the building can be secured against unauthorised access much sooner.

Barnard said the steady growth in the membership of SASFA – which now stands at more than 60 member companies – was evidence of the growing popularity of LSF building, cautioning however that these should not be confused with prefabricated building.

“In LSF building, the supporting frame is made from thin gauge, high-strength galvanized steel sheet, which has been cold-formed into lip-channel sections. These sections are joined using rivets or self-tapping screws to form strong wall frames, roof trusses and floor joists,” he said.

The wall panels are then clad using fibre-cement and gypsum boards, fixed using battery powered screw guns to install the self-drilling screws. Insulation (glass wool) is installed in the wall cavities to provide the thermal efficiency and enhance the acoustic properties of the walls.

As far back as 2013, the fast food chain McDonald’s built an outlet in Cape Town which employed LSF in its construction. In this project, said Barnard, material wastage was reduced by 30%, transport costs by 80% and the carbon footprint was significantly reduced.

“The savings on construction time were of such an order that McDonald’s were able to open the outlet four months earlier, something they would not have been able to do had they used traditional building methods.”

ZacPak has signed a 15-year lease with Fortress Logistics for 15,664m² warehousing space at the Clairwood Logistics Park in KwaZulu-Natal. The facility is expected...
Read more
Disaster Management

EMIRA Property Fund has relaunched its Springfield Retail Centre in Durban, KwaZulu-Natal, a year after the centre was damaged by arson in the widespread...
Read more
Construction & Civils

LEADING clay brick and paving manufacturer Corobrik has been accredited as a Skills Development Provider (SDP) by the Quality Council for Trades & Occupations...
Read more