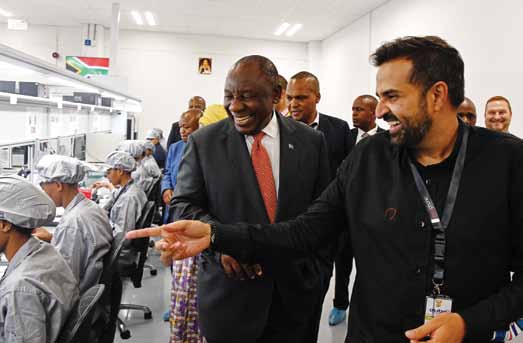 The launch event was attended by President Cyril Ramaphosa, Premier Sihle Zikalala and other political and business leaders.

It marked the Mara Group’s follow-through on an investment undertaking made during the South Africa Investment Conference held in October 2018 and led by Ramaphosa. The conference, which formed part of a five-year investment drive to raise US$100 billion, showcased the country’s compelling investment opportunities.

Mara Phones South Africa (Pty) Ltd, within the Dube TradePort SEZ is set to employ almost 1 500 people upon expansion. It currently employs 200 people, 90% of whom were unemployed graduates, with 60% of those women. It has the manufacturing capacity to produce 1,2 million units annually.

The plant will make two new devices, which will be made available through a number of distribution channels targeting primarily first-time African smart phone users. Mara Phones South Africa plans to export its devices to Angola, Botswana, the Democratic Republic of Congo, Lesotho, Mozambique, Namibia, Swaziland and Zambia.

Dube TradePort is considered to be one of South Africa’s top 10 investment opportunities. The SEZ had already attracted R3,2 billion in private sector investment, the majority of which was dedicated to the manufacturing focused Dube TradeZone 1. The new facility forms part of a growing electronics cluster there.

Accordingly, the manufacture of smart phones within the country is likely to make a sizeable contribution towards ongoing import substitution efforts.

Work on Dube TradePort Special Economic Zone phase 2 is well underway, with 45 hectares now open for applications from investors. The second phase of the Dube TradeZone development is targeting R18 billion of investment over the next five years.

While sustainability, circularity and the goal of net-zero emissions by 2050 are topping the agendas of organisations around the world, South Africa is caught...
Read more
Electronic - Instrumentation & Control

AS mines systematically assess the risks related to their trackless mining machinery (TMM), they increasingly see the value in proximity detection systems (PDS). With...
Read more