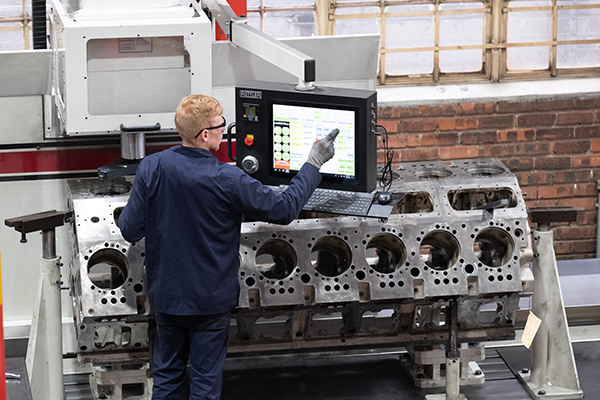 This is the view of Andrew Yorke, Operations Director at Metric Automotive Engineering, a remanufacturer of large diesel and gas engine components.

The company boasts one of the leading crankshaft grinding facilities in Africa and deals with crankshafts from industrial compressors through to locomotive engines. This according to Yorke, equips it to grind shafts up to 4,7-metres-long and weighing up to two tons.

Its workshop includes seven modern three-axis CNC machines. These are the only units in Africa of this type, capable of performing line-boring, surfacing and blue-printing of engine blocks up to six metres in length.

“The original equipment manufacturers (OEMs) of these diesel engines expect their components to be remanufactured for long term lowest cost of ownership, and we achieve this by meeting OEM standards.”

Yorke said the remanufacturing sector offered much-needed opportunities for skills development and employment and that it could absorb many more skilled employees if there was renewed commitment to policies and practices that supported local procurement.

“The remanufacturing of these components represents an important recycling activity, which helps governments and customers to meet carbon-reduction targets. At the same time, retaining this vital function within the local economy strengthens economic capacity while reducing the country’s need to spend foreign exchange on imports.”

He warned, however, that OEM pricing of aftermarket parts was making remanufacturing less viable and needed to be addressed. If the skills required for large diesel engine component remanufacture and assembly are lost, engine testing skills would suffer the same fate.

“If we ended up only importing new large diesel engines instead of remanufacturing components, we would soon need to import the skills to maintain them too. South Africa must be strategic about our economic choices – for instance, by supporting automotive engineering that focuses on engine component remanufacture.”

BAUER Geared Motors South Africa, the sole Southern African distributor of the Bauer range for the past 37 years, was acquired by Hudaco in...
Read more
Energy – Power Generation

Engine maker doubles down on dealers in southern Africa

CUMMINS has increased its regional distribution network in southern Africa from six to 12 as part of an ongoing expansion of its dealer network...
Read more

Bosch Projects is a joint winner in the 2021 CESA Aon Engineering Excellence Awards, for the UCL 175 TCH Factory Expansion Project, in the...
Read more

THE road closure caused by the reconstruction of the slow lane on the busy N3 Durban-bound from Sanctuary Road to Link Road in Town...
Read more

BUSINESS at truck body and trailer-building company Serco has improved this year compared with 2020 but is still below that achieved in 2019. This is...
Read more

Bosch Projects is a joint winner in the 2021 CESA Aon Engineering Excellence Awards, for the UCL 175 TCH Factory Expansion Project, in the...
Read more

BUSINESS at truck body and trailer-building company Serco has improved this year compared with 2020 but is still below that achieved in 2019. This is...
Read more