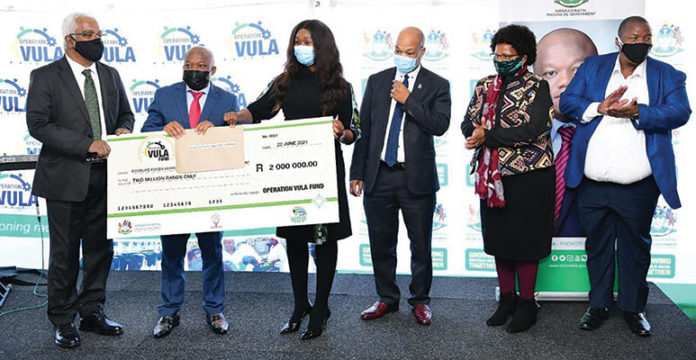 KWAZULU-Natal Premier Sihle Zikalala has called for the province’s entrepreneurs to step up the production of goods in townships and villages, both for the local and export market. He was speaking in Pietermaritzburg recently at the launch of Operation Vula Fund disbursements.

As part of the launch, the Premier handed over catering equipment, vehicles, computers, and farming implements to successful applicants from the uMgungundlovu district.

Zikalala warned that beneficiaries were not allowed to sell the equipment. In the event that a business collapses the equipment will have to be returned to the government.

Further handovers were planned for subsequent weeks, with the Premier and members of the provincial executive council due to visit various districts.

“We will disburse equipment with a combined value of R300 million to more than 1000 SMMEs who have been selected as successful applicants. To date we have approved a total 1021 applications with a value of R299,157 million,” Zikalala said.

Zikalala said the Operation Vula Fund disbursements would serve as a major boost to the province’s job creation and economic recovery efforts and would help to create and sustain an estimated 10,816 jobs.

MEC for Economic Development, Tourism and Environmental Affairs, Ravi Pillay said SMMEs have a critical role to play in the creation of jobs. “In developed countries, up to 80% of the jobs are created by SMMES so this task that the beneficiaries have is a critical one for the future of our province and our country”.

Pillay said the Department of Economic Development, Tourism and Environmental Affairs would monitor progress and offer support to the beneficiaries.

“As a department we will want to come and visit you to see how you are doing. Firstly, we will want to see that the machinery is there and is being used for the purpose for which it was requested. Secondly, we want to see how you are developing to become a successful enterprise. We will look at the operational side, the financial management side and also access to markets”.