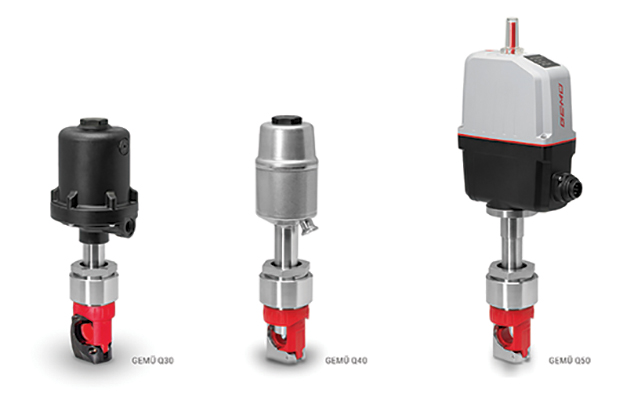 GEMÜ is expanding its wide range of valves to include the new Q series of pinch valves.

This includes the Gemü Q50 eSyStep, a motorized version of the new pinch valves, alongside the Gemü Q30 and Gemü Q40 piston actuators, in plastic and stainless steel respectively, which are both pneumatically operated.

According to the company, the valves are specially designed for single-use applications and facilitate fast and simple replacement of media-conveying tubes.

“A compressor is used to control or regulate the flow of media in the tube. The specially developed contour of the compressor ensures the pressure applied to the tubes is very gentle. This minimizes the stress and extends the service life,” the company said in a statement.

The new pinch valves are designed to allow fast and simple replacement of tubes without tools. At the same time, a circlip prevents accidental opening of the tube bracket. The tube holder also serves as a safety guard during operation.

“One valve size can be used for several nominal tube sizes. Should you need to change the size of the tube within a valve size, the tube holder and the compressor can be replaced afterwards. The actuators remain in the system and must not be removed.”

For panel mounting of the valves, in a cleanroom for example, an optional flange plate in stainless steel is available.

The Gemü Q series is suitable for a wide variety of applications such as media mixing, fermentation or cell harvesting. Further applications may include purification, filtration or chromatography.

With no end in sight to loadshedding, it’s important for municipalities to start engaging in energy efficient mechanisms in their water and wastewater infrastructure. This...
Read more
Pipes & Tubes

New tech that cleans up wastewater

COLLECTING and recycling wastewater is a fundamental part of settled human activities. The oldest examples of sewage systems go back thousands of years, and...
Read more
Pumps, Valves, Hydraulics, Pneumatics

A ready-to-connect pressure booster system with the ability to assist municipalities struggling with water reticulation has been introduced to the local market by pump...
Read more