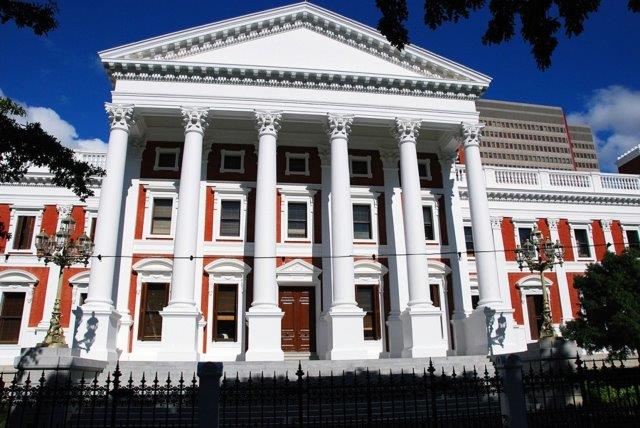 THE fire at the Houses of Parliament in central Cape Town on 2 January has again raised the issue of protecting heritage structures and other buildings containing priceless artefacts or documents from fire risk.

That’s according to ASP Fire CEO Michael van Niekerk, who said this was not the first time a heritage building had been the victim of a fire, citing the blaze last April which spread from Table Mountain to the upper campus of the University of Cape Town (UCT), causing extensive damage to the African Studies Library reading room.

The Parliament fire is believed to have started on the third floor of the National Council of Provinces building before spreading to the office space and gymnasium and then the National Assembly building, which was completely gutted.

“It is particularly challenging where you have a building that did not necessarily have fire resistance measures incorporated into its design,” Van Niekerk said, adding that a key consideration with a heritage building is whether it has been adapted from its original function and construction, or is a relatively new building that can accommodate such measures?

The construction materials used in older buildings are often not in line with modern regulations, he said. Complicating the issue is that heritage buildings are difficult to retrofit with conventional sprinkler systems, for example, since their external appearance has to be preserved.

Modern buildings also deploy drencher systems that can cool the exterior with water curtains to protect windows, doors, walls and roofs against an encroaching fire. “This is probably the best strategy to adopt in the event of a fire like the Table Mountain blaze, as it means a heat shield is essentially created around a building in order to protect it,” Van Niekerk said.

In addition to modern advances like recessed sprinkler systems, which are only activated in the event of a fire, another solution is a hypoxic system that introduces nitrogen into an area to reduce the oxygen level to the point where spontaneous combustion cannot occur.

Van Niekerk believes, however, that the best approach remains a proper fire-risk assessment that examines a building holistically.

“There are also internal factors that need to be considered, such as the possible sources of ignition inside a building and how best to manage these. Notwithstanding that a building is old, the electrical system can still be modernised without affecting its heritage ‘look and feel’.”

In addition, modern electrical management systems based on earth leakage and thermal resistors, as well as computer monitoring, can result in an automatic shutdown if any risks are detected. These can range from fans, heaters and computer terminals that are left on to overloaded multi-plug extensions, a common cause of fire in a typical office environment, for example.

“Managing the internal environment of a building adequately allows for the fire risk to be minimised. Obviously, risk can never be eliminated 100%, but it can definitely be reduced to an acceptable level.”

Van Niekerk said an effective means to achieve this is to introduce refuge areas into heritage buildings in particular as part of the overall life-safety strategy. A refuge area has its own oxygen supply and fire-rated walls and doors to protect occupants until a fire dies down or is brought under control.

“There is an onus on the owners or trustees of a heritage or historic building to safeguard that building against fire. This is a risk assessment that any responsible building owner should conduct. It is advisable for any commercial or academic institution to request their insurers to come take a look at their buildings in order to give them advice. If the insurer does not have the necessary technical expertise or experience, ASP Fire offers this specialised service to a host of insurers.”