On the frontlines of the war against alien vegetation 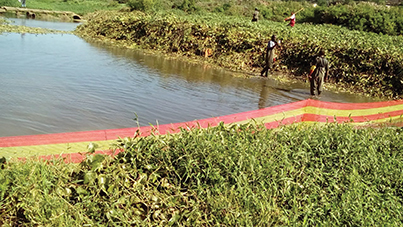 SOUTH Africa is currently facing a major environmental problem, where invasive alien plants are aggressively spreading and taking precious water and space from our indigenous plants.

Added to this, dense alien vegetation provides fuel for veld fires, causing damage to the soil structure beneath. “Invasive alien plants are also a major threat to biodiversity in catchment areas, potentially disrupting the delicate natural balance in ecosystems. In South Africa there are now approximately 383 invasive plant species that must be urgently controlled to prevent further damage.”

These management plans involve the identification of the types of species in the area and recommendations are provided as to which control and management methods are best suited for eradication and management of the alien vegetation.

“Although alien invasive species can be managed in various ways – manual and mechanical (labour and mechanical equipment), biological (beetles and viruses) or with chemicals (herbicides), we prefer to use environmentally-friendly manual, mechanical and biological methods.”

In a current project taking place on a river in Durban, Bosch Munitech is controlling the spread of Water Hyacinth, through a combination of manual and biological management methods.

Manual removal of alien vegetation normally involves hand-pulling of invasive plants, like Water Hyacinth, from the water surface, using a pitchfork and treble hooks. Because this method is labour-intensive, it is only effective for limited areas of infestation. Another problem with manual control, is that vegetation removal from deep water, like canals, requires additional equipment, such as rafts or boats, as well as various safety precautions.

In the current Durban river project, Bosch Munitech’s recommendation was to clear a pocket of Water Hyacinth from the river directly in front of the area where a specially designed and manufactured net was installed. Pitchforks and treble hooks were used to manually pull the hyacinth to the sides of the river.

The plants were then moved to the stock piling location, where they were left to dry before being transported to areas of rehabilitation, to be used as a mulch fertilizer.

Invasive alien plants, like Water Hyacinth, thrive and spread in an exponential manner, partly due to the lack of natural enemies, like browsers or pathogens, that exist in their native land.

Bosch Munitech uses biological biocontrol agents, like insects, mites or other pathogens, to remove an alien plant’s competitive advantage and to reduce its vigour to a level comparable to that of the natural vegetation.

EMIRA Property Fund has relaunched its Springfield Retail Centre in Durban, KwaZulu-Natal, a year after the centre was damaged by arson in the widespread...
Read more
Disaster Management

In July 2021 the Samsung Customer Service Centre in Riverhorse Valley was one of many businesses impacted by the looting in KZN. Since then...
Read more
Disaster Management

THE National Empowerment Fund (NEF) has approved the release of R1-billion in funds for small businesses affected by the 2021 July unrest. The NEF achieved...
Read more