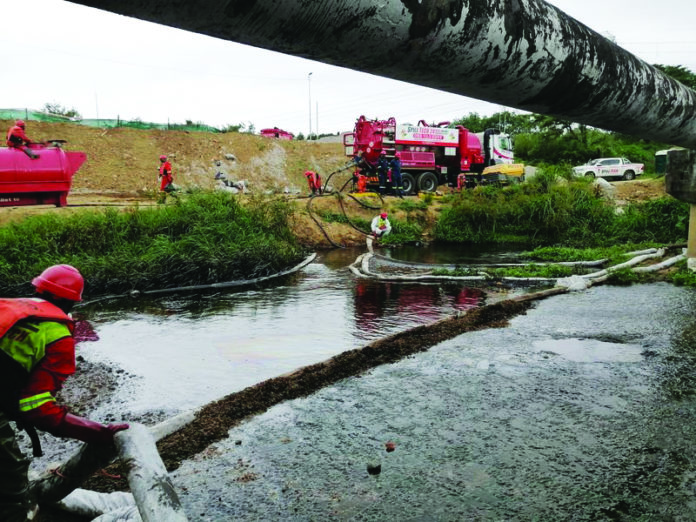 TRANSNET says it may take as long as two years to fully clean up the estimated 60 000 litres of crude oil which spilled into the Umbilo River from a ruptured pipeline in south Durban after a recent botched theft attempt.

It also revealed that that the Durban incident is just one of 90 this financial year experienced by its pipelines unit which manages 3,800km of high-pressure petroleum and gas pipelines across the country.

The latest occurred on 29 October as KZN Industrial & Business News went to press, with Transnet Pipelines (TPL) saying it occurred in the Ladysmith area and targeted its 24-inch multiproduct pipeline transporting fuel from Durban to Gauteng.

The attempted theft led to diesel spraying onto the N3 freeway. TPL said its emergency plan had been activated and response teams were on site in an effort to minimise the contamination and start with the clean-up.

The scale of the leak was unknown at the time of publishing.

“The pipelines repair team is doing everything possible to effect the repairs in the shortest space of time. We are in discussions with our customers to manage the supply of diesel to the inland market during the repair period,” TPL said in a statement.

Thus far, in the current financial year, TPL has had some 90 incidents of theft and attempted theft.

The breaches have already had a negative impact on business and the environment, with farmers in June blaming diesel theft for shortages and price increases. The Durban and Ladysmith incidents add weight to calls to beef up security and possibly deploy camera equipped drones to patrol the pipelines.

Commenting on the Durban spill earlier, Tanuja Naidoo Acting Chief Executive of TPL said the cleaning and rehabilitation could take up to 24 months along the 8km stretch from the source of the spill in the Bellair area to the harbour.

“It’s a long haul to rehabilitate the environment but we are committed to ensuring that nature is restored.,” Naidoo said during a recent site inspection. She added that they had completed repairs to the pipeline, “thereby averting any security of supply challenges in the inland market area”.

KwaZulu-Natal MEC for Economic Development, Tourism and Environmental Affairs, Nomusa Dube-Ncube, was also there and said an independent team of scientists would assist with the investigation.

“We have assembled the skills required to deal with a spillage of this magnitude,” she said, adding that it was likely to have a significant impact on the biodiversity of the area. Fishing in the harbour was prohibited after the incident and hadn’t resumed at the time of going to press.

Nor had any arrests been made, although Dube said she was confident that “law-enforcement agencies will establish what happened”.

Bring in the drones

According to Business Insider, Transnet earlier this year put out a request for a drone fleet with high-powered cameras to supplement security teams using 4×4 vehicles.
Transet has also revealed the modus operandi employed by the fuel thieves, who either break into block valve chambers or dig holes along the pipeline and weld on a fitting before syphoning the fuel to tanker trucks. Frequent failures of these hastily assembled fittings result in spills that cause pollution and even fires.
Naidoo said Transnet Pipelines had implemented “various action plans” to tackle the problem, include collaborating with law enforcement agencies, which has led to numerous arrests, and impounding of vehicles and fuel tankers.
“The first successful conviction was recently obtained, and the perpetrator was sentenced to 13 years. The pipeline is classified as essential infrastructure, therefore tampering, or colluding to tamper, is a Schedule 5 offence … The sentencing sends a strong message to other perpetrators that tampering with essential infrastructure is a serious offence which will be dealt with accordingly.”
She appealed to anyone living near the pipelines or driving past, especially at night, to report suspicious activities like bakkies or fuel tankers in the area of the block valve chambers or near pipeline markers, using the toll-free number 0800 203 843.

Securing the future of the SA sugar industry

The Sugar Industry Master Plan was signed by all stakeholders and social partners on the 16th of November 2020. Dave Howells, MD of Tongaat...
Read more
Energy – Power Generation

PRESIDENT Cyril Ramaphosa's announcement that the cap on self-generation without a licence will be raised to 100MW is “a bold but necessary” move. That’s according...
Read more
Construction & Civils

CONSTRUCTION of the Kokstad interchange and traffic control centre on Section 21 of the N2 in KwaZulu-Natal will begin in September, the South African...
Read more

Securing the future of the SA sugar industry

The Sugar Industry Master Plan was signed by all stakeholders and social partners on the 16th of November 2020. Dave Howells, MD of Tongaat...
Read more

PRESIDENT Cyril Ramaphosa's announcement that the cap on self-generation without a licence will be raised to 100MW is “a bold but necessary” move. That’s according...
Read more

CONSTRUCTION of the Kokstad interchange and traffic control centre on Section 21 of the N2 in KwaZulu-Natal will begin in September, the South African...
Read more

PRESIDENT Cyril Ramaphosa's announcement that the cap on self-generation without a licence will be raised to 100MW is “a bold but necessary” move. That’s according...
Read more