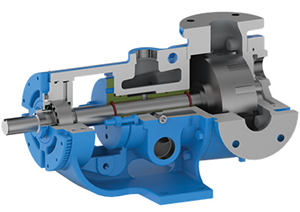 Viking Pump have developed a new sealing technology for their extensive range of Universal Seal series pumps – the O-Pro Seal.

As the name suggest, the seal uses a series of O-rings to create a robust seal and lubrication chamber in a single piece seal. According to local distributors Natal Pump Services, it is generally more cost effective than many mechanical seal options while reducing leakage rates compared to those experienced from pumps with packing.

It is also designed for back-pull-out, reducing downtime and simplifying maintenance.

There are three options of this new sealing technology.

The first, the O-Pro Barrier seal replaces both the bushing and the sealing elements – packing or mechanical seal – with a machined seal gland. This design combines a bracket bushing and seal gland made of hardened cast iron with two sets of double O ring seals giving reliable sealing with easy maintenance.

Originally designed for use in the sugar and confectionary industries, the O-Pro Barrier Seal can be retro-fitted to the majority of Viking Universal Seal packed pumps without modification. It is ideal for a wide variety of applications in industry such as pumping isocyanate, paints, adhesives and inks as the barrier fluid stops air bound moisture contacting the fluid.

The other two options, O-Pro Guard and O-Pro Cartridge are suitable for replacing mechanical seals and packing in instances when a hardened cast iron bushing isn’t suitable.

Available in stainless steel, these options both replace packing or a mechanical seal by using a series of O-rings to seal between the bracket and shaft surfaces giving a compact design for easy retrofit and simple ongoing future maintenance.

The O-Pro Seals come with sanitary FKM O-rings as standard and can be fitted to both the standard and jacketed versions of the Universal Seal product lines. The Viking Universal Seal series of pumps fitted with O-Pro seals cover flows to 295 m3/hr, discharge pressures to 14 bar and process liquid viscosities between 20 – 1,700 cSt at temperatures between -15°C to +175°C.

TONGAAT HULETT has had its shares suspended from trading on the JSE. The company confirmed the temporary suspension in a Sens on Monday, saying...
Read more
Pumps, Valves, Hydraulics, Pneumatics

With no end in sight to loadshedding, it’s important for municipalities to start engaging in energy efficient mechanisms in their water and wastewater infrastructure. This...
Read more