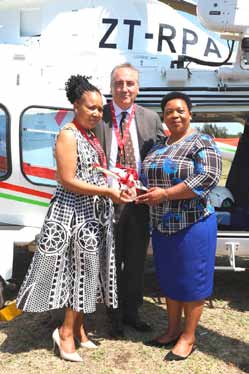 A guard of honour and ceremonial flyover were among the activities marking the official launch in Richards Bay recently of Transnet National Ports Authority’s (TNPA) two new port helicopters.

The event was attended by dignitaries including KwaZulu-Natal MEC for Economic Development, Tourism and Environmental Affairs, Nomusa Dube-Ncube, councillors from local municipalities and industry principals.

Manufactured by Italian global company, Leonardo, the helicopters are now in service at the KwaZulu-Natal Ports of Durban and Richards Bay. They are used to transfer marine pilots onto and off visiting ships for the vessels to be guided safely and efficiently into our port waters.

“The new craft will bring benefits for our customers and improve the global competitiveness of our ports, resulting in economic benefits to the region,” she said.

TNPA’s Acting COO, Captain Rufus Lekala, said the port authority had been on a transformation journey and had invested a total of R500 million which included the helicopters as well as the training and development of aviation pilots and engineers.

“We have 26 pilots available, 20 of whom are from TNPA’s training programme and 50% of these are women. TNPA’s training programme started in 2012 has to date produced 20 helicopter pilots as well as 14 helicopter maintenance technicians. This programme is now insourced, meaning that all helicopters, facilities, operating licenses and aviation personnel belong to TNPA, and all operations are conducted by and under TNPA,” he said.

All maintenance and training will also be done in-house, creating a completely new service to the benefit of TNPA customers.

Under the contract’s supplier development commitments, a local aviation company based in Pretoria was empowered through this project, and 14 TNPA aviation personnel are receiving training at Leonardo’s facilities in Italy with a further eight trained via an instructor who was dispatched to South Africa in July this year.

The Leonardo (AW 109SP) helicopters, valued at approximately R250 million in total, will replace helicopters that are reaching the end of their life cycle.

The Ports of Durban and Richards Bay are presently the only ports in TNPA’s complementary port system which use helicopters to transfer marine pilots. However, the service will also be introduced at the Port of Cape Town. The new Cape Town helicopter is due in 2022.

Lekala, said, “We now have four helicopters in our fleet for KZN and Cape Town will bring this to five. By acquiring these new helicopters, our intention is to provide a world-class marine service with improved ship turnaround times and reliability.”

He said the AW109SP is a modern top-of-the-range light twin-engine helicopter with excellent operational flexibility as well as high safety levels through advanced navigation and situational awareness technology. The two new AW109 SP’s are equipped with a harbour pilot shuttle kit, which features a hoist that enables this distinctive operation, as well as several other installations unique to Transnet’s aircraft.

ZacPak has signed a 15-year lease with Fortress Logistics for 15,664m² warehousing space at the Clairwood Logistics Park in KwaZulu-Natal. The facility is expected...
Read more
Finance & Investment

Shipping & Logistics: How to guard against cyberattack

By Kate Mollett: Regional Director, Commvault Africa THE shipping and logistics industry is increasingly a target of cybercrime and ransomware attacks, a trend that has...
Read more
Automotive