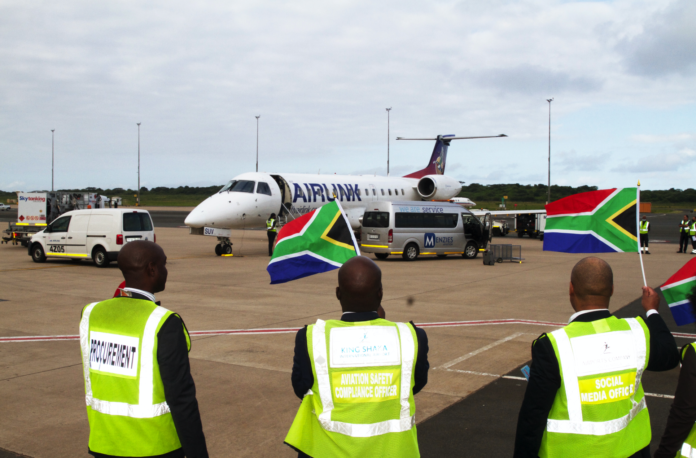 Airlink’s modern Embraer ERJ135 Regional Jet was welcomed with a water salute as it touched down at King Shaka International Airport on Tuesday 5 April this year, celebrating the introduction of direct flights between Harare, Zimbabwe and Durban.

This is Airlink’s third direct route from Harare, Zimbabwe’s capital city, along with Johannesburg and Cape Town and it will operate flights on Tuesdays, Thursdays, and Sundays.

Zimbabwe is one of South Africa’s key trading partners and according to the Organisation for Economic Co-operation and Development, South Africa’s exports, year-on-year to November 2021, increased by 10,6% from R3,5 billion to R3,87 billion, while imports increased by an impressive 85,8% from R156 million to R290 million. While it is true to say that most of this trade comprises road freight, air freight is also currently moved through OR Tambo and Cape Town International Airports.

“This new route will significantly improve both leisure and business travel, which – in turn – will greatly assist our tourism sector’s recovery from the devastation of the COVID-19 health emergency and the associated restrictions under which it has had to labour for so long. Importantly, too, the air route opens the door to the prospect of an altogether new era of air-based trade between Durban and its surrounds and Harare,” said Mr Pillay.

Speaking on behalf of the Mayor of eThekwini Municipality, Councillor Mxolisi Kaunda, Councillor Msizi Mabaso said: “eThekwini is excited to welcome this new route, especially as it is set to open more opportunities for travel within the African continent. Such routes contribute to our goals of facilitating more intra-Africa trade opportunities as it makes it easier to travel for business and pleasure.”

Locally a resilient domestic market has been critical to the recovery of air travel in South Africa with King Shaka International Airport passenger numbers breaching the 60% mark. Overall, domestic travel now contributes in excess of 84% of Airport Company South Africa’s (ACSA) airport network traffic, compared against a 69% contribution in 2019.

ACSA’s Regional General Manager, Nkosinathi Myatasa, said: “To ensure our sustainability and agility in a constantly changing business environment, we embarked on a recover and sustain strategy, coupled with a revision of the company’s governance framework and operating model.”

Part of this, and in common with approaches from Provincial and Local Government, the tourism industry and airline operators, includes:

Airlink Chief Executive and Managing Director, Rodger Foster, underscored the commercial and tourism importance of Durban and Harare, which were key Airlink markets.

“We believe that our new service will promote commerce and tourism between the cities, as well as the province and Zimbabwe. Non-stop flights are popular because they are more convenient and save time for travelers,” he said.