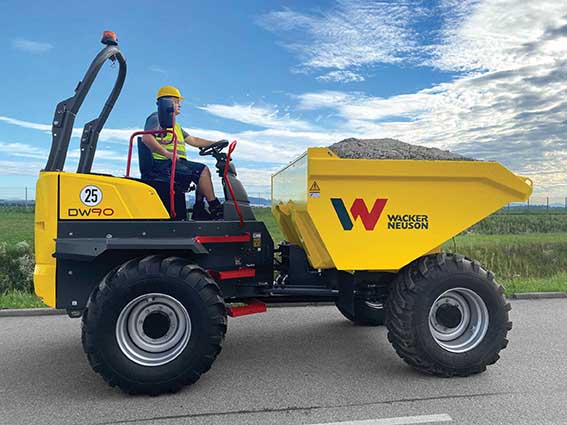 Three new mini-excavators, the ET42, EZ50 and ET58, will be available in the four-to five-metric ton class. All three models are equipped with the new Active Working Signal (AWS), a red LED strip integrated in the engine hood which signals the operational readiness of the machine.

The tracked excavator ET42 is available with another optional new feature, the Vertical Digging System (VDS).

“This system, which only Wacker Neuson offers in the compact class, allows exact vertical digging even on an uneven ground surface, kerbs or slopes. The tilting mechanism necessary for this is installed in the travel gear on the ET42 model,” said Greschner, adding that this saves up to 25 percent in both materials and time.

“The wheel loader WL28 is impressive as a flexibly deployable transport helper with a high tipping load and even more comfort and safety. The powerful hydraulic options provide sensitive control and allow the operation of a wide variety of attachments such as, for example, snow blowers, pallet forks or sweepers.”

The reworked telehandler TH412, with 1.25 metric tons of payload and a stacking height of four meters, is the most compact model in the range. Like all telehandlers by Wacker Neuson, the TH412 is also equipped with the innovative Vertical Lift System driver assistance system: due to the partially automated telescopic movement and the nearly vertical lifting or lowering movement, the stability of the machine is improved.

The time-tested wheel dumpers DW60 and DW90, with 6,000 and 9,000 kilograms of payload respectively, are the largest wheel dumpers in the Wacker Neuson portfolio. They have been reworked and now come with a diesel engine of emission standard Stage V.

The portfolio in the area of soil compaction includes the proven trench roller RTx. The maintenance-free lower mass of the roller has been further optimised with several adaptations to the design.

The new model generation of the walk-behind vibratory roller RD7, with a drum width of 650 millimeters, delivers optimum work results on asphalt as well as on soil surfaces. The end user benefits here from simple operation via a particularly ergonomic center pole as well as tool-free access to all service points.

“With its revised design and function, the center pole makes compacting very easy for the operator. All the operator’s control elements can be reached directly on the guide handle. Also, the roller RD7 exhibits, with less than 2.5 m/s², the lowest hand-arm vibration values on the market.”

The backpack system, which was developed with a leading brand manufacturer, distributes the total weight of 13.5 kilograms – of which about nine kilograms is for the battery – ergonomically on several load points.

All Wacker Neuson’s zero-emission compaction machines – battery-powered rammers, battery-powered vibratory plates and internal vibrators – are operated with the same modular lithium-ion battery which can be swapped between machines.

AS a non-profit organisation, the South African National Blood Service (SANBS) provides a critical, often lifesaving service to the public, ensuring that those who...
Read more
Construction & Civils