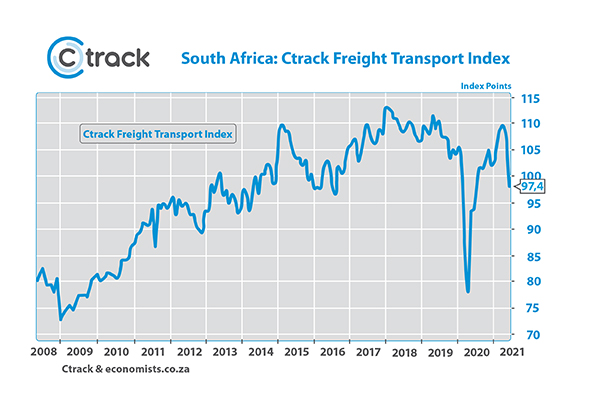 THE recent looting and unrest in various parts of South Africa have had a massive impact on most sectors measured by the Ctrack Freight Transport Index.

The Ctrack Freight Transport data shows a split set of data. On a year-on-year basis, the numbers look extremely strong for the sector. However, the quarter ending in July shows the first decline in a year.

Hein Jordt, Managing Director of Ctrack SA said the quarterly and yearly data is smoothed, so it is not easy to spot the damage in these numbers, particularly because many sectors, such as Road Freight, were very strong in June. The monthly Ctrack Freight Transport Index paints a clearer picture of the damage done by the looting as well as the downtime of the Transnet computer systems.

The decline between June and July is the steepest decline since April 2020, when level five lockdown restrictions were implemented.

“It was terrible to see all the hard work that business has put into recovering from the effects of COVID-19 lockdown restrictions go up in smoke within a few days,” said Jordt.

A decline of 9,7% (slightly estimated due to some Transnet Port data not being available in time) between the months of June and July shows that the freight transport sector was severely affected by the looting in KZN and Gauteng.

As a result, the overall Ctrack Freight Transport Index declined to levels last seen in August 2020. “It is almost as if a whole year of progress was wiped out in a few weeks. Every day over 6500 containers move in and out of South African ports. There is no way that this operation can run without the sophisticated computer system that is in place. “

Jordt said modern logistics is a system that is held together by information and computer networks. “Hackers know this and were most probably hoping that they would be paid to put things right in the wake of the chaos caused by the downtime of Transnet’s computer systems.”

He said the damage to the South African economy caused by both these events was significant and will be felt for some time. “While the crossing of borders is still tedious due to the COVID test requirements, the impact could last longer than normal. The timing of these two incidents, in close succession of each other, could mean that delays at the ports could take weeks, if not months, to resolve.”

He added that the country’s GDP could have grown by about 1% if not for these two events, which affected the logistics industry, centred in KwaZulu-Natal, but with effects felt in Gauteng, as this is where the majority of the goods were headed.

The majority of sectors measured by the Ctrack Freight Index have declined in recent months. Sea Freight was the biggest loser declining by 24,3%, followed by Storage and Handling with a decline of 16,2%. Even the two fastest-growing sectors, Road Freight and Air Freight, have declined with losses of 9,3% and 3,2% respectively.

The measurement of truck movements through 84 key points across the country backs this data up with a decline of 11,5%. However, points in Kwa-Zulu Natal reported more significant declines of over 20%. Pipelines were the only sector to show growth.

While the catch up has already started, it will take some time for the backlogs across all sectors to be cleared.