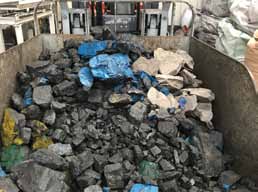 A proprietary testing procedure developed specifically for local coal samples by WMP Consultants for the Telligent Dry Separator (TDS) has been trialled successfully, with a site in KwaZulu-Natal featuring prominently.

The samples were tested at the DADI Engineering Development Group sister company Meiteng Technology by consultant Tony Weatherby on behalf of Aury Africa.

Weatherby has refined the procedure to test coal samples in the TDS, characterising all of the components of the sample prior to a full test. “I changed the sample procedure in such a way that we can actually characterise the various elements of the coal seam before we apply the necessary algorithm, thereby giving a much better calibration curve,” he said.

As a result, Aury Africa is in the process of sending a 20-ton bulk sample to China for validation of the test initial results, followed by a further six run-of-mine (ROM) samples of discard and coal-recovery samples from various customers.

A particularly exciting development has been the successful testing of a sample from a discard dump in KwaZulu-Natal, containing a mixture of bituminous and anthracite coal from two separate mining streams.

The TDS was able to clearly differentiate the two materials in the sample, which means that discard dumps can be turned into potential sources of additional revue for mining operations.

The fact that the TDS is not water-based not only reduces the footprint of mineral-processing plants due to the downscaling of the Dense Medium Separation (DMS) circuit as a result, it also means that slurry material is reduced drastically, thereby offering a significant environmental benefit, in addition to overall cost-savings.

The TDS was developed by Meiteng Technology in 2015. Aury Africa launched the technology locally at the South African Coal Processing Society’s biennial conference in Secunda in September 2017. At that time, three operating mines in China were using the equipment, which is now being commonly applied globally as far afield as Mongolia.

The TDS constitutes intelligent dry separation technology. Essentially coal is conveyed on an enclosed, single-layered conveying system that incorporates dual X-ray technology. It can be retrofitted to an existing coal-processing plant in various configurations.

The system features image-identification technology, with the separator accurately identifying and separating coal and its components, without using water or any other medium. There is also no slime generation, with the TDS subsequently producing a higher yield of coarse coal at low operational cost at an increased return-on-investment, compared to conventional process systems.

The technology can process 300 mm to 50 mm and 150 mm to 25 mm raw coal, with an upper throughput of about 400 tph. The higher tonnage output makes the TDS more efficient compared to competitor dry sorter technology. Aury Africa is continuously striving to improve the technology’s separation capabilities in order to achieve coal sizing down to 12 mm.

The TDS is fully automated and modular, and also self-diagnostic. The longer the unit runs, the more accurate it becomes. “The margin of reject material compared to coal is reduced, as the TDS learns and adapts continuously,” said Aury Africa Managing Director Sydney Parkhouse.

SUPPLY chain efficiency is important to keep the country moving forward. So much so that 60 percent of respondents in global studies suggest that...
Read more