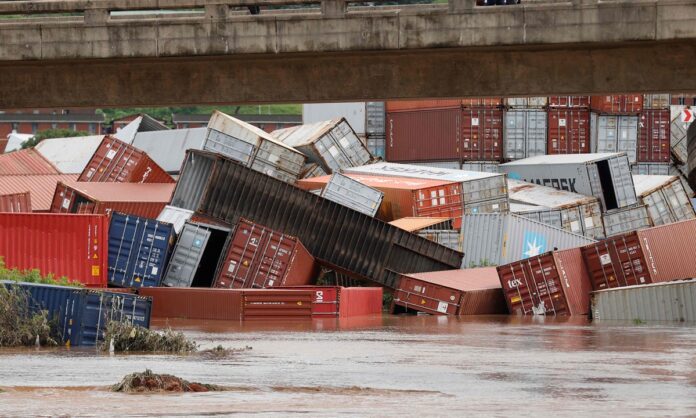 THE catastrophic flooding in KwaZulu-Natal is a wake-up call for local and national government to ensure that future urban development is integrated and resilient to extreme weather events.

That’s according to Darrin Green, MD Africa at global infrastructure consulting firm AECOM, who said, “The effects are widespread, and I do not think anyone has a proper handle yet on the extent of the infrastructure damage. There is a long road ahead to fix this”.

Parts of the province received over 300mm of rainfall in a 24-hour period from 11 to 12 April, and close to 400mm, including the preceding rain in the days leading up to the floods.

While the entire province was impacted, the worse-hit areas were the eThekwini metro and the districts of iLembe, Ugu, King Cetshwayo, and uMgungundlovu. Informal settlements close to rivers and waterways were severely affected, with numerous dwellings swept away and nearly 450 lives lost to date. The flooding disrupted fuel and food supplies.

“It was a 100-year rainfall event for some areas,” said Timothy Hotchkiss, an engineer at the company’s Durban office specialising in flood management and the design of water-related infrastructure.

“That is just in terms of the rainfall itself, which cannot be correlated directly with the flooding. Once everything is saturated, the runoff is much higher. Then there is the secondary impact of landslides and erosion that can change the natural runoff characteristics, resulting in unpredictable impacts that can cause further significant damage to infrastructure.”

KZN Premier Sihle Zikalala estimated it will cost about R5.6 billion to repair the damage to road infrastructure alone. While Durban Port, one of the largest and busiest shipping terminals on the continent, has since reopened, at the time of going to press there was a backlog of 8000 to 9000 containers.

“We will be involved with a lot of the repair and rebuild work, especially in terms of bulk infrastructure such as roads and water networks,” said Hotchkiss. The company has carried out flood mitigation work for a major automotive manufacturer in the region in conjunction with the metro.

Green said a lack of integrated planning was a countrywide issue. “There is very little holistic planning around any of these critical factors. Unfortunately, this has contributed significantly to what we have seen happen in KwaZulu-Natal. We are paying the price for years of under-planning and a lack of investment in maintenance and infrastructure.”

The immediate priority is to ensure that the water supply in eThekwini is fully restored, followed by the electricity and road networks.

In some cases, the authorities have consultants and contractors on frameworks and term tenders, and therefore may be able to respond relatively quickly to some of the immediate and less complicated infrastructure repairs. However, on the whole, emergency procurement will need to be put in place.

“We have seen before that this does not always have the desired outcomes. We need to mobilise as quickly and as effectively as possible,” said Green. Consulting Engineers South Africa (CESA) has stated that its members are on standby to provide any assistance required.

Freight and logistics group Grindrod said its container depots, terminals and warehouse facilities in and around central Durban have been heavily impacted by the floods.

“The impact to Grindrod includes damage to equipment and infrastructure. Activity to recover customer containers and restore facilities has commenced, in collaboration with our insurers,” the group said in a statement.

“Whilst the floods have been devastating, our equipment and facilities that have been damaged are all insured, including cover for business interruption. In addition, engagement with key customers is underway around contingencies, including those required for the upcoming citrus season.”

Good news is that the supply of jet fuel to airlines flying in-and-out of OR Tambo International Airport is stable and continues to meet the demand of airlines, according to Airports Company South Africa (ACSA) Chief Executive Officer, Mpumi Mpofu.

This is in spite of disruptions to the transportation of the jet fuel-value chain as a result of many factors initially starting with the railway infrastructure damage caused by the floods, resulting in force majeure being declared by several companies, most notably SASOL.
Approximately 140 sections of Transnet Freight Rail (TFR) lines were damaged on the route to Johannesburg. Of the 67 rail tanks to OR Tambo International Airport, only 11 arrived, with 56 remaining behind.

It is estimated that TFR will only be able to repair the damaged rail infrastructure by the June, prompting it, ACSA and oil companies to develop an interim plan to transport the remaining 56 rail tanks to National Petroleum Refiners of South Africa (NATREF) at Sasolburg and pipe it on to OR Tambo.

“We have confirmation by NATREF of an additional supply of 14 million litres of jet fuel. Additionally, we are expecting a shipment of 10 million litres on 5 May which will assist in stabilizing ACSA’s fuel levels to approximately three to four days’ worth of stock,” Mpofu said.

“This situation has created uncertainty amongst international airlines, but I want to assure our airline partners and passengers that there is adequate fuel at OR Tambo International Airport and all our airports. We are in continued engagements with oil suppliers to share stock. Some international airlines are in the process of confirming the availability of stock directly with their suppliers.”