Jobs blow for Estcourt as hardboard producer goes under 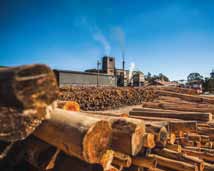 Engineered wood producer Evowood, formerly known as Masonite, has been placed in voluntary liquidation by the Companies and Intellectual Property Commission (CIPC).

Nkosinathi Nhlangulela, a director of Evowood, confirmed this week that the Estcourt-based mill ceased operations earlier this month after having consulted staff. Closure of the mill has resulted in the loss of 460 permanent jobs as well as temporary jobs.

He said that the company, which had been placed in business rescue by its international parent company in December 2015, initially had a promising future. It was acquired by the Timber Investment One consortium, which was eager to implement a business turnaround strategy based on a R300-million cash injection.

However, in February 2017, the company endured a protracted illegal strike, which not only led to lost production time and extensive damage to plant, but also resulted in uncertainty among Evowood’s customers.

Nhlangulela said this was compounded by economic turbulence in the country that impacted heavily on the construction industry, which accounted for the bulk of the company’s business.

“This and the time needed to rebuild the confidence of our customers who had begun looking for alternative suppliers provided an opportunity for cheap imports to flood the South African market. This prolonged the turnaround phase,” he said.

These factors resulted in the withdrawal of the international funding that was urgently needed by the struggling business.

Nhlangulela said that at a time when government was calling for industrialisation and job creation, it was particularly sad to see the demise of the one of the largest hardboard mills in the southern hemisphere. It was one of the biggest employers in the Estcourt area.

He said Evowood had never really recovered from the substantial losses incurred during the strike and, despite having brought in international engineers to attempt to repair equipment that was old and regularly breaking down, it was unable to ensure continuity of supply.

A total of R78 million was spent attempting to repair and maintain machinery and rebuild the mill. However, much of the equipment was old and unreliable. By June 2018, this had cut capacity by 50 percent.

This year, a timber shortage due to excessive rain and further plant breakdowns compounded liquidity challenges.

Nhlangulela said employee safety had always been the priority of the shareholders and without a massive cash injection into the upgrade of machinery, the group felt it was no longer safe to continue operating, he added.

He said that staff were preferent creditors in the winding up of the company, and provisional liquidators would be appointed by the Master of the High Court in due course.

SAPPI is pleased to announce that all three of its manufacturing regions – Europe, North America and Southern Africa – have once again achieved...
Read more
Events

SAPPI, the country’s pulp, and paper heavyweight, recorded a strong performance in the quarter ending in March 31 – the second quarter of its...
Read more
Chemicals

IN 2012, Buckman, a US-headquartered specialty chemical company, partnered with Energy Drive with a goal of reducing electricity usage and water consumption at Buckman’s...
Read more