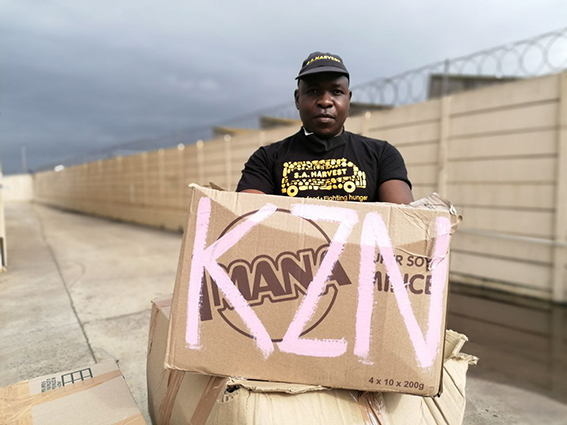 FOOD charity SA Harvest and a large cohort of collaborators – donors, producers, manufacturers, and logistics companies – have backed a relief programme to tackle the devastation and hunger in KwaZulu-Natal following the recent unrest.

A 1,000-square-metre marquee was erected on sports grounds in the city centre within one day and, at the time of going to press, was serving as a temporary warehouse for the massive volumes of food and essentials being transported to the city from SA Harvest’s branches in Johannesburg and Cape Town.

This location has become SA Harvest’s base for distributing relief food and emergency products to vetted beneficiary organisations in the most severely affected parts of KZN.

SA Harvest  CEO Alan Browde said their response to the rioting and looting began immediately as the severity of the damage and the ensuing shortages became evident. “Our branch in Durban and the area where our warehouse is located were directly affected by the unrest so we were intensely aware of the unfolding crisis.”

He said that since SA Harvest launched in September 2019, the national food rescue organisation had delivered the equivalent of 7,2 million meals to food vulnerable communities.

Thanks to its strong infrastructure, logistical and technology capabilities, it was able to respond to the latest crisis.

“Our existing food donors have responded with enormous generosity, and we have received financial donations from concerned organisations, expats and individuals that have enabled us to secure produce, dry groceries, and sundry health and hygiene products such as nappies and sanitary pads, from a wide network of donors and suppliers in Cape Town and Johannesburg.

“To date, we have been able to send five fully laden 30-ton interlink trucks to Durban from Jo’burg and Cape Town.”

Sorting and distribution of the relief stock is being undertaken from the SA Harvest temporary warehouse and delivered to over 100 vetted beneficiaries that are all registered non-profit organisations.

More importantly, added Browde, data collection systems have been bolstered  to ensure accurate reporting to donors and efficient and equitable distribution of produce to the fast-growing number of beneficiaries in a substantially increased geographical area.

“Transparency is fundamental to our operation and we are being especially vigilant in a situation where the rapid extension of our services to the more rural and largely neglected areas of KZN that have been severely affected by the unrest.”

Browde believes the KZN region will suffer after-effects for some time and says that SA Harvest will continue providing assistance in some form or another for years to come.

“We are constantly amazed – and deeply grateful – at the extent of the generous donations of food, money and other products. We have also had exceptional support from logistics companies, and many concerned and compassionate food donors.

“It is inspiring how South Africans come together to assist one another when facing crises – it’s one of the most uplifting experiences of living  in this country.”