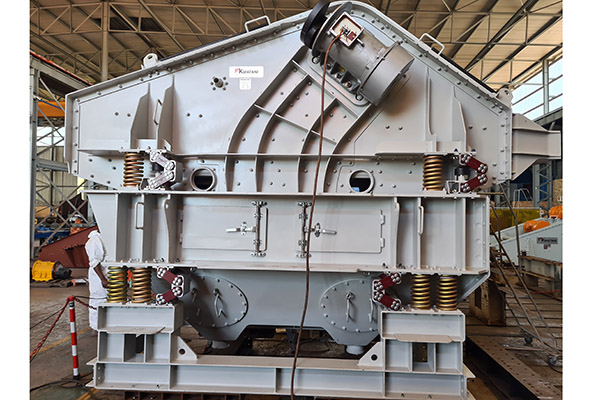 That’s according to Kwatani’s chief operating officer, Kenny Mayhew-Ridgers, who said the company had achieved considerable improvements in many screening applications by selectively fitting torsional springs alongside coil springs.

“It is well known that the vibrating motion of a screen impacts on the building and structural accessories around it,” he said. “This vibration is addressed by fitting isolators between the screen and the plant floor, and by constructing the plant building to certain minimum structural specifications.”

However, he added, the focus is often on the frequencies that the screen generates in its steady-state phase – or the normal running phase – rather than during the transient phases when the screen is starting up or slowing down to a stop.

Mayhew-Ridgers said that it is during these transient phases that the screen’s movement becomes amplified and potentially most destructive. Isolators between the screen and the floor – common among which are coil springs and rubber buffers – are meant to absorb vibrations and prevent damage to surrounding infrastructure.

However, the transient phases, especially when stopping, can generate considerable sideways movement of the screen, which must be avoided, he warned.

“Traditional isolators like coil springs usually perform well in controlling the up-and-down movement of the screen. Our experience is that the sideways movement, which is induced most strongly when the machine stops, can be better controlled by torsional springs.”

However, he noted that coil springs retain the advantages of being cost effective and providing a good linear isolation of the screen from the building structure. In this respect, their isolation characteristics are generally better than rubber buffers which rather excel in terms of their damping qualities.

“The torsional spring provides the best of both worlds, giving a good linear range for compression during operation while also becoming non-linear like the rubber buffer during stopping,” he said.

Kwatani has developed and trialled various solutions in its dedicated testing centre at its headquarters in Kempton Park. Mayhew-Ridgers said that by optimising the best combination of coil springs and torsional springs, the company had succeeded in achieving the best results for customers.

“It’s not that torsional springs are better than coil springs,” said Mayhew-Ridgers. “It is about finding the right combination – through intensive testing and adaptation – for the customer’s particular requirements; we have both the expertise and the equipment to do this.”

INDUSTRY is under pressure to increase production while reducing costs and shrinking their carbon footprint. thyssenkrupp Uhde is perfectly positioned to assist industry in...
Read more
Construction & Civils

Why transfer chutes should be a primary consideration in plant design

THE significance of correct chute designs to ensure efficient transfer of material in processing plants without blockages, spillage and with minimum wear cannot be...
Read more