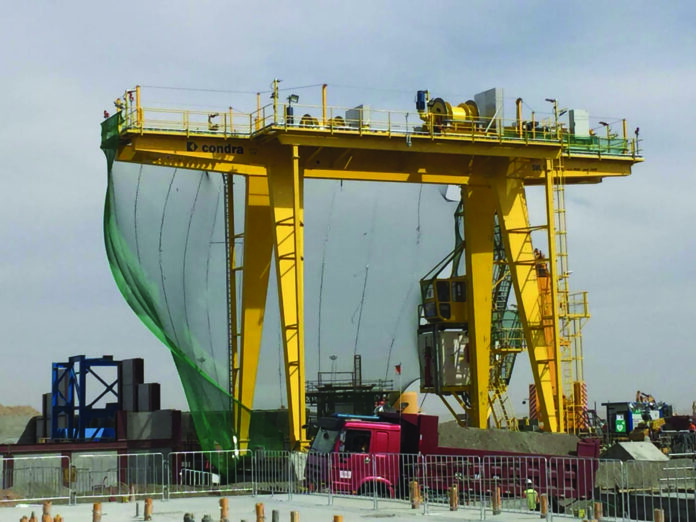 CONDRA has announced that it is to supply six cranes, one portal and five double-girder overhead machines to a South African mine belonging to an unnamed mining house.

The mining house has been operating Condra overhead cranes and hoists since the late 1990s, employing them in a spread of mines and applications across west and southern Africa.

Of the six cranes ordered, four are identical 10-ton overhead machines with spans of 6,5 metres, and two have already been delivered. The first was installed underground and commissioned on November 24 for maintenance duty on pumps, motors and other equipment. The remaining two 10-ton cranes will be completed this year to join the third on site early in 2022.

A fifth crane, a 15-ton portal machine, is earmarked for receiving and dispatch duties, while the biggest of the six cranes ordered will be a 25-ton electric overhead travelling workshop unit.

Condra’s tenders for the three orders proved successful against multi-company competition. Kleiner said their prices were not the lowest, supporting growing evidence of a trend toward buyers valuing lower overall lifetime costs over price, these lower costs being achieved through supplier commitment and an ability to deliver ongoing, reasonably priced after-sales service and maintenance.

A similar trend can also be seen in the market for second-hand cranes, where almost-new machines manufactured by companies unable to deliver effective maintenance lose value faster than much older cranes from more reputable firms.

“If a crane cannot be maintained, then it has no long-term value,” said Kleine. “Some brands carry risk of rapidly escalating maintenance costs after the guarantee period. Project consultants are not liable for these after the warranty expires, so when a customer needs service at the end of that time, he sometimes finds the cost higher than projected.

“Our customers face no such doubts.”

The six cranes for the mining house are machines of standard design, fitted out to customer specification. Remotely controlled, there are pendants for alternative manual control. The cranes also feature floodlights to aid operation, and bulkhead lights for safety on all walkways.

Other safety fittings include flame-proofing of brakes and electric panels to IP65 standard, and weather-canopies over all motors. Flashing lights and sirens warn when the cranes are in motion.

Kleiner is hopeful of further orders from this and other mining customers early next year, with Condra having tendered for a number of overhead cranes and specialised machines such as the recent jib crane.

“We continue to manufacture what we believe are the best cranes and hoists for African conditions. Condra strives for a reputation as the go-to company for the continent’s mines.”

When handling heavy loads is a key Criterion

THE growth in demand for electric forklifts, as well as the uptick in the economy, are key drivers of the forklift market, according to...
Read more