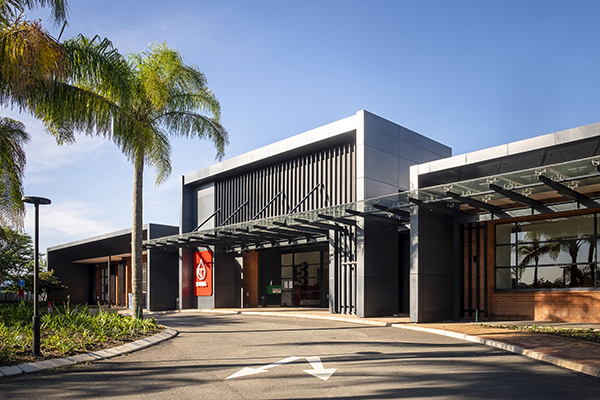 AS a non-profit organisation, the South African National Blood Service (SANBS) provides a critical, often lifesaving service to the public, ensuring that those who need a blood transfusion can receive one.

When the zone headquarters of the SANBS in Mount Edgecombe, KwaZulu-Natal, needed an infusion of new life, it appointed leading engineering and design firm WSP as the environmentally sustainable design consultant and Green Star accredited professional.

Together with the professional team and client, WSP developed a vision for the project. This resulted in the conversion of a shell industrial building into a sustainable, light-filled space that now accommodates the head office, laboratory, and a public-facing area.

WSP reviewed all the designs, from the architectural interpretation to the mechanical and electrical design. This included using a building energy modelling program to test the performance of various solutions proposed by the professional team and WSP was able to confirm the best solution for the project as a whole.

The project required important refurbishments that enabled it to be more efficient in a sustainable manner. The first of these entailed replacing the existing HVAC system, which was nearly 20 years old, with a modern refrigeration system that uses a R32 which is a replacement refrigerant for the typically used R410a. The global warming for R32 is 677, three times less than that of R410a. This is an important step towards reducing the carbon footprint of the HVAC plant.

Light was the next element that had to be brought into the new space, which was accomplished by using large light wells to bring natural light into the building.

All existing lighting was replaced with energy efficient LEDs. Due to the fact that the building was previously a warehouse with high ceilings, more intimate spaces were created using a drop-down ceiling in some areas and free hanging lights for the most efficient illumination across the large space. The building also deployed a highly efficient light design that includes the use of sensors to turn off lighting in unoccupied areas.

Ventilation was also improved to ensure that the laboratory receives fresh air. Laboratories need to minimise any possibility of biological contamination to keep the blood products sterile. This is achieved by not recirculating air in the laboratory and using high performance hepa filters to prevent contaminants entering the space.

Non-critical areas such as the offices receive 14 to 16 litres of fresh air per second per person, which is double the minimum allowable fresh air of 7.5 litres/second per person. This is significant, particularly with regards to COVID-19 consideration, as it generates far less opportunity for potential viruses to be circulated throughout the space.

The new building also had to enable the SANBS to raise awareness and be people friendly. To that end, the headquarters now include an auditorium and upper level from which visitors can see into the laboratory to engender greater interest in the SANBS’ work. Even this construction was done with sustainability at the forefront.

“One of the most important aspects of the offices, with regards to sustainability, was reusing materials, including the flooring, wherever possible,” says Alison Groves, the Regional Director of WSP in Africa.

“This not only reduces embodied carbon associated with a new design, but it is also considerably more environmentally friendly,” Groves adds. “Apart from reinforcing the foundations beneath the access flooring, there was very little concrete poured.

Furthermore, new steel usage was minimised due to existing steel façade already in place.”
The other significant aspect of the new offices is the large solar array in the parking area. All the previous shading has been converted to photovoltaic cells, which provides approximately 20 percent of the building’s energy requirements. The solar array design has provided for 2 electric vehicle charging bays which are free for the SANBS staff to use. This is another step to encourage the SANBS staff to consider and possibly adopt sustainable means in their commute.

“It is an energy-hungry building as some of the laboratories are in use 24 hours, seven days a week. This is supplanted by a smaller staff that works throughout the night, and so its energy demands far exceed those of a typical office complex,” explains Groves.

Unlike a typical office building, the SANBS headquarters must contend with two different types of waste, normal waste and biological waste. Management of each must be performed separately. While medical waste management is handled by a third party, as required by regulations, the organisation hadn’t previously considered recycling normal waste. WSP enabled them to separate this at the source which in turn reduces impact on landfills.

“Bearing in mind the area’s vulnerability to water scarcity, we enabled SANBS to capture rainwater on the roof, store it in tanks and then use it throughout the building to flush the toilets,” explains Groves. “Additionally, water is used economically by enabling hot water only where it is needed, in the kitchen and laboratories, and only cold water in the ablution facilities.”

All these measures have not only transformed a dull warehouse into an a more efficient space for the SANBS to do its essential work, but it has also earned the building a Five-star Design Rating from the Green Building Council of South Africa (GBCSA) with an As-Built rating pending.

The building has also achieved a Net Zero Carbon Level 1 Base Building Emissions (Modelled) As Built Certification from the GBCSA. Finally, it proved that drab industrial spaces can be redesigned to be as friendly to the environment as they are inviting to the public.