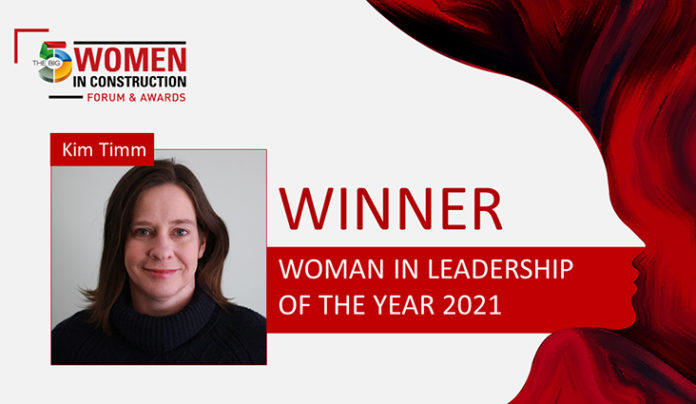 STRUCTURAL engineer Kim Timm was announced as the Woman in Leadership of the Year at The Big 5 Women in Construction Awards 2021 held in Dubai on recently.

“If we support and encourage each other, we can change the world,” said Timm, Executive – Structures, Buildings and Places at AECOM and active in the industry for 18 years.

She said that when she commenced her career, there were very few women engineers. “The industry has evolved over the past 20 years, but it can still be a challenge to be taken seriously as a woman in engineering.”

The Big 5 construction trade event made its in-person return this year, welcoming back the global construction industry to reconnect face-to-face for the first time in two years. It saw 50 exhibiting countries, 20 country pavilions and 1 200 confirmed exhibitors, making it one of the largest trade shows of its kind in the world.

The Women in Construction Forum & Awards align with Goal 5 of the UN Sustainable Development Goals. Goal 5 highlights the positive socioeconomic impact of a gender-balanced workforce by showcasing the female professionals who excel in their role, and the companies with a proven track record of implementing positive change to push the industry forward in equality and representation.

The awards are open to female professionals and companies who operate in the Middle East, Africa and the South Asian construction industry.

Timm has a master’s degree in Structural Engineering from the University of Stellenbosch, has won the CESA (Consulting Engineers South Africa) Mentor of the Year 2019 and was recognised by SAPSA (South African Professional Services Awards) as the Professional Woman of the Year 2019/20. She has co-authored numerous papers and articles and worked on a wide range of multi-award-winning buildings projects, from power-stations to commercial office blocks. She is currently the technical lead for AECOM Structures in the Gauteng office in South Africa.

In 2020, Kim was nominated as a Diversity Champion for AECOM South Africa, focused on retaining youth talent. In this role, Kim investigated the motivations driving under 35s to look beyond the company for career opportunities.

In her most recent project, Timm’s performance and comprehension of the requirements impressed the client to the point where they broadened the scope of the work from five people full-time for three months to 18 people full-time for 22 months. This work has been a major contributor for the division’s financial wellbeing, especially during these difficult economic times brought on by the pandemic.

Darrin Green, Managing Director of AECOM’s business in Africa, said Timm has the intellect to understand and implement complex engineering challenges. “She has earned the respect of all those with whom she has crossed paths, this in an industry that is dominated by men. She has given back to the industry by mentoring newcomers to the industry, irrespective of age, race, or gender.

“She has the mindfulness to practice situational leadership and adapt to the challenge at hand. She has been awarded numerous awards and clearly is an inspiration to all woman in the industry, all of this while fulfilling her other roles as a wife, mother and active member of her local community.”

Timm said: “We cannot, as women, complain that the world does not provide us with opportunities on a silver platter. We cannot expect others to do the footwork and just reap the rewards. Each and every one of us must be the absolute best we can be in order to prove the naysayers wrong.”

The online world is embroiled in a war. Such a statement may seem exaggerated and dramatic, but the figures paint a different picture. In 2021,...
Read more
Government & Municipal

TRANSNET says the granting of peace officer status to its security officers is an important step in ramping up the fight against cable and...
Read more
Automotive