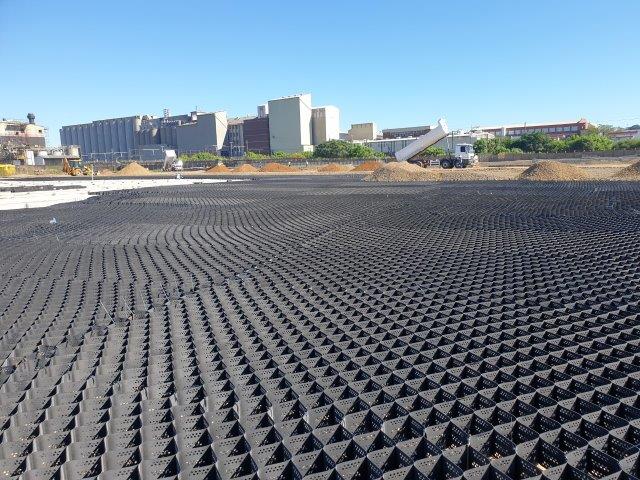 THE application of geofoam as a lightweight fill solution for road construction at the Clairwood Logistics Park in South Durban is a first for South Africa.

That’s according to consulting engineering and infrastructure advisory firm Zutari, which also provided a unique geocell solution for the founding and pavement design of the container yard at Pocket 2B.

The company said this proved a more economical and viable solution for the container yard infrastructure compared to the rigid inclusions applied elsewhere on-site.

Dr Gabi Wojtowitz, Associate Design Director at Zutari said the design was carried out last year, with construction commencing in November 2020. The container yard is complete, and geofoam as road fill construction will be completed in 2022.

The scope of work for client Fortress Real Estate Investments, represented by Nico Prinsloo, involved the planning and concept to detailed design development and implementation of the Clairwood Logistics Park, situated on the old Clairwood racecourse site.

The 76.6 ha site is bordered by Transnet railway lines to the west and south, by a fully developed industrial area to the north and the M4 highway to the east. The development consists of a light industrial park and associated infrastructure. The new Spine Road will serve as the main internal road, running in a north-south direction. An existing 406.4 mm fuel pipeline is also located within a portion of the site, with Spine Road crossing it in Pocket Area 7 of the site.

To achieve finished grade level, the proposed road embankment would be in-fill, higher than the current ground level above the pipeline, thereby imposing a surcharge load onto the sensitive pipeline.

To reduce the load resulting from the construction to an acceptable level, a lightweight fill consisting of an expanded polystyrene (EPS) geofoam solution was proposed as a substitute for conventional fill material for the embankment coupled with a piled structure to protect the pipeline. This aims to ensure that the imposed load on the pipeline and underlying soils is not increased as a result of constructing the new access road.

The lightweight EPS geofoam is placed onto a 100 mm bedding sand layer. The system is wrapped in a geomembrane as protection against corrosion from potential contaminants in the groundwater. A load distribution slab is placed on top of the geofoam, while the road pavement consists of a continuously reinforced concrete pavement.

The pavement was designed with anchor blocks or base anchors to prevent the pavement from ‘creeping’, which can have detrimental effects on additional structures. Creeping is largely due to moisture and temperature movements within the pavement.

Due to this being the first application of its kind in South Africa, Zutari received technical assistance from Steven Bartlett, Associate Professor in Civil and Environmental Engineering at the University of Utah in the US. The EPS geofoam itself was supplied by Iso Moulders of Durban. Group Technical

Manager Eric Axelrad said that the product, branded as Geo Block Geofoam, is a lightweight alternative to conventional fill material such as natural soil, gravel, cobbles and crushed rock, which has dominated construction for centuries.

The design of the container yard itself had to take into account the equipment loads from the machinery, which are generally carried in the pavement structure, and the container stacking loads.

“The loads on these platforms are massive, with the typical vehicles used here having a wheel load in the order of a 250 kN, which is similar to the load exerted on a heavy aircraft apron, for example,” said Dr Anton Hartman, Pavements and Materials Lead at Zutari.

Geosynthetics were considered to be the most economical and practical approach, whereby the earthworks and layer works are engineered to deal with the anticipated settlement.

The proposed solution was based on a geocell-centred design with a geogrid as a structural separation layer. A geocell is a 3D honeycomb geosynthetic product that functions like a semi-rigid mat in distributing the surface loads over a wide area of the foundation soil, significantly improving the bearing capacity of soft soils in particular. “Feasibility and cost were major factors in terms of selecting an appropriate solution,” said Hartman.

The Clairwood site is underlain by unconsolidated soft clays and silts which, when loaded, will be subject to long-term consolidation settlements. These layers are highly variable and the resultant settlements will vary across the site. In addition, the site has an overlay of imported unconsolidated bulk fill which will contribute to the variable settlements. The shallow water table varies from natural ground level to 2m below ground.

“The site is a ground engineer’s dream due to the multiple issues we had to deal with related to the soil conditions,” said Wojtowitz.

The design of the system required close trans-disciplinary collaboration between the Pavements, Civils and Geotechnical disciplines, as all of the components were intrinsically interconnected and affected how the system ultimately worked. The Zutari team included Civil Engineer Diran Hurnanan and Civil Technologist Johan Kotze.

IMAGINE a truck that only emits water vapor, produces its own electricity onboard and has a range of up to 1 000 km. It’s...
Read more
Construction & Civils

THE Mass Discounters distribution centre in Durban, which suffered extensive damage due to the July civil unrest last year, has been demolished. The work was...
Read more