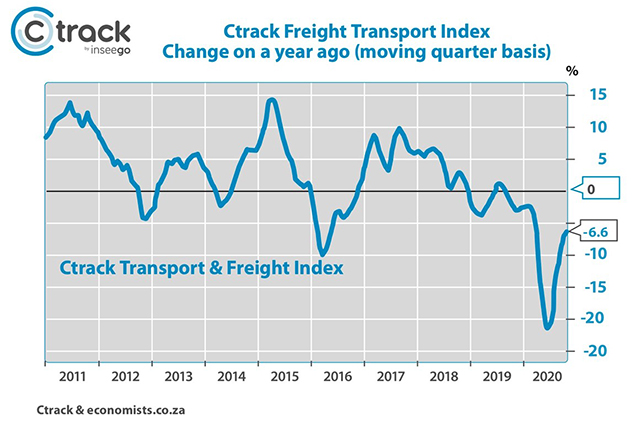 GROWTH has slowed in the improving freight transport sector, but the upward yearly trend remains on course.

That’s according to Hein Jordt, Managing Director of Ctrack SA, who said the sector still shows negative growth on a year-on-year basis, but far less so than in the last seven months. This insight emerged from the Ctrack Freight Transport Index which measures the overall logistics sector in South Africa.

The Index recorded a year-on-year decline of -6.5% for the period that ended in October. However, the index was basically stagnant between October and September with a figure of -0,4%. “As monthly data can still change slightly, we believe it is a small pause rather than a change in trend.,” Jordt said.

“It is a pity that the positive recovery following COVID-19 lockdown measures is now being affected by factors such as delays at border posts and violence aimed at truckers,” he said, adding that the speed of the improvement for the next two or three months was likely to be slower as capacity gets closer to previous levels.

“With the biggest decline now behind South Africa, other problems are unfortunately starting to emerge. Delays at borders are sometimes more than a week and during the last week of October the average delay for heavy trucks at the Beitbridge border post was close to 100 hours.”

He said the economic strife that was absent during COVID-19 lockdown period is now once again rearing its head as truckers have come under attack in various regions of South Africa.

Internationally analysts have seen the global supply chain recover up to 90% of pre lockdown levels but further lockdown restrictions in Europe and the USA have put the brakes on that recovery.

“The fourth quarter of 2020 will certainly not see the same growth as the record breaking third quarter did, but some improvement is still expected.”

Jordt said the slowdown in growth was expected. “Most analysts will attest that the closer an industry gets to its previous levels, efficiencies, productivity levels and bottlenecks have to be overcome again. Furthermore, some sectors, such as tourism which also require transportation of freight, will take years to get back to speed. Fortunately, the overall Road Transport industry has held up reasonably well.”

Bulk Rail transport underperformed slightly, which he said was probably due to supply chain disruptions in China and elsewhere.

“Following a period of negative growth, 95% of the bounce back can happen in a few months but the last 5% can easily take double the amount of time. As other sectors are also integrated with transport sectors it is clear that reaching 100% of the levels seen in the middle of 2019 is still some months away.”

Commenting on the COVID-19 vaccines, Jordt said, “As rollout begins over the next year or so, the world and even tourism, will get back to normality. Of course, this vaccine is still largely unproven but this good news from scientists is important for the transport sector too.”