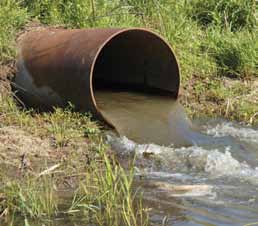 THE accidental release last week of some 240 tons of toxic effluent into the Msunduzi River in Pietermaritzburg should alert governing bodies to the importance of identifying and addressing environmental and social risk in all their activities, says Karin Ireton, Chair of the Sustainable Development Forum at the Institute of Directors in Southern Africa (IoDSA).

According to news reports, a suspected burst valve caused storage tanks at Willowton Oil Mills to collapse and discharge their contents into the Baynespruit tributary of the Msunduzi, site of the famous Duzi canoe race and part of the uMngeni river system.

The contamination has already caused the death of thousands of fish as well as livestock, and communities downstream have been advised not to use water from the river for any purpose until it is declared safe.

“It is essential that companies plan for worst-case scenarios and implement controls that will prevent contamination of our water courses. Water is essential to all life, and as South Africa is an arid country we must protect it and use it wisely at all times,” said Ireton.

“Pollution such as has been seen in the Pietermaritzburg area is not only a breach of regulation but has a long-term and highly significant impact on aquatic life and surrounding communities. It is time for companies to integrate fully the costs of their operations on natural capital, such as water, wetlands, biodiversity as well as the social impact on the impacted communities.

“Sadly, this incident is not unique. Other river systems in the country are in crisis and ongoing pollution of the Hennops River, the Vaal River and several others poses major long-term risks for the citizens of this country, exacerbated by failing municipal waste-water treatment facilities and poor waste-management practices by citizens and municipalities,” Ireton said.

IoDSA’s CEO Parmi Natesan said incident once again highlights the fact that all organisations are dependent on the broader context in which they operate.

The International Integrated Reporting framework lists six capitals on which businesses rely: Human, Social and Relational, Manufactured, Intellectual, Environment and Financial. The important concept that business exists within, and depends on, a supporting environment is described as the “triple context” of the economy, society and environment in the King Reports on Corporate Governance. King IV indicates that these should not be seen—and reported on—as a whole.

“The old view that companies use only financial capital has been superseded by the understanding that all organisations also utilise a range of common resources to deliver value for their shareholders,” Natesan says.

“This is why King IV requires members of the governing body to ‘take responsibility for anticipating, preventing or otherwise ameliorating the negative outcomes of the organisation’s activities and outputs on the triple context in which it operates, and the capitals that it uses and affects’.”

Because of an organisation’s intimate interrelationship with society and the environment, King IV advocates the concept of corporate citizenship. This means that organisations have both rights and responsibilities as regards society and the natural environment on which both depend. To give effect to these rights and responsibilities, the Companies Act makes it mandatory for certain organisations to form social and ethics committees.

King IV further recommends that even organisations that are not obligated to form such committees should put in place a formal mechanism for overseeing and reporting on “organisational ethics, responsible corporate citizenship, sustainable development and stakeholder relationships”.

“A key insight of King IV is that risk and opportunity are two sides of the same coin. It’s thus critical that governing bodies understand how the organisation creates value, but also the potential negative impacts it might have on the various capitals on which it relies,” Natesan said.

“The governing body bears ultimate responsibility for ensuring that effective plans are in place to mitigate risk and, if it materialises, to minimise its effects. Organisations without such plans risk regulatory sanction and a potential fine, but the longer term risk of a weakened social licence to operate could be even more harmful.”

EMIRA Property Fund has relaunched its Springfield Retail Centre in Durban, KwaZulu-Natal, a year after the centre was damaged by arson in the widespread...
Read more
Disaster Management

In July 2021 the Samsung Customer Service Centre in Riverhorse Valley was one of many businesses impacted by the looting in KZN. Since then...
Read more
Disaster Management

THE National Empowerment Fund (NEF) has approved the release of R1-billion in funds for small businesses affected by the 2021 July unrest. The NEF achieved...
Read more