At the forefront of the forecourt since 1961 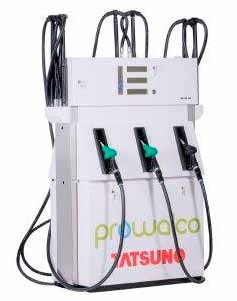 AFTER a move to new premises late last year, Prowalco Tatsuno, a Bud Group Company, continues to boast the largest and most sophisticated pump-service infrastructure on the African continent.

That’s according to CEO Annali May, who added that the company provides this service under contract or on an ad hoc basis to all of the major oil companies in South Africa from its branches in Durban, Johannesburg and Cape Town. Its also has service operations in Lesotho, Swaziland, Namibia and Botswana.

Prowalco Tatsuno is the sole African distributor of the Tatsuno Corporation range of pumps and dispensers, manufactured by Tatsuno of Japan, which became a shareholder in 2018. Tatsuno is the leading fuel-dispenser manufacturer in Asia.

“The relationship between Prowalco and Tatsuno has strengthened over the years, as both companies share the goal of delivering the best quality and most technologically-advanced products to the oil industry,” said May.

The company moved to new headquarters in November 2018, following its establishment in its old premises in 1961. “It was time for a change that suited the new management team, our new values, and our world-class technology. The new premises have brought new energy and forward-thinking to all of our employees,” May said.

May said the fact that Prowalco Tatsuno manufactures locally means that customers can rest assured of having access to readily available spares on a fast turnaround. “The Prowalco UPP project team can deliver a complete package of UPP pipework, manhole chambers, dispenser containment, submersible pumps and smart fuel stock and environmental monitoring systems,” she said.

Senior Project Manager Barend Bekker said projects are designed around exact customer needs and delivered in a single shipment, ready for installation. “We also test equipment on site and provide sign-off once installation has been completed,” he said.

INDUSTRY is under pressure to increase production while reducing costs and shrinking their carbon footprint. thyssenkrupp Uhde is perfectly positioned to assist industry in...
Read more
Associations

THE mismatch between skills in demand within the chemical industry and skills that are being developed in South Africa is negatively affecting the employability...
Read more
Chemicals

WITH an ever-growing population, cities and governments face extreme pressures to ensure city infrastructure not only caters for the needs of populations, but is...
Read more