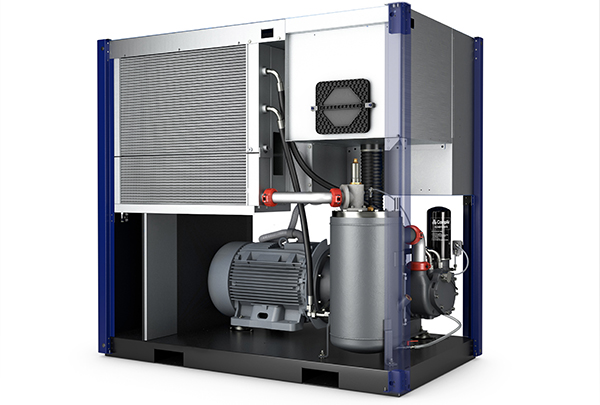 CompAir has announced its latest oil-lubricated compressors as part of its L-Series range, which covers air-cooled models from 55 to 75 kW and is available in both fixed and regulated speeds.

The company said that when compared with previous models, the new compressors offer up to eight percent efficiency improvements, as well as up to five percent higher flow rate.

The range incorporates many of the features that the previous models offered – such as an automatic motor lubrication system as standard to help reduce downtime and increase the lifespan of motor bearings, as well as a semi-integrated airend and Victaulic fittings for easy maintenance and reduced leakage risks – but encompasses a range of key new benefits, too.

One of these is the newly designed, semi-integrated airend. Featuring a new rotor profile that helps reduce noise and vibration levels, the airend is manufactured in-house, at the company’s Centre of Excellence in Simmern, Germany. It has also been designed with a larger-sized inlet and outlet. This helps to increase air flow and limit pressure drop.

For variable speed models, the new airend comes with an automatic oil regulation valve, which controls the oil’s discharge temperature according to environmental conditions.

“Not only does this remove the risk of condensate and – as a result – corrosion, but it also ensures the oil in the system remains at suitably high standard at all times and can improve efficiency levels by up to five per cent. This has been cleverly integrated, along with the oil filter, into the airend’s housing, helping to eliminate the risk of oil leaks while simplifying maintenance too,” the company said in a statement.

The new airend is supported by CompAir’s Assure warranty, which covers the airend for up to ten years or for 44,000 hours.

All doors on the unit are hinged and can be easily removed, improving accessibility for users while also assisting with space requirements. Furthermore, service parts, such as separators and filters, have also been optimised to make maintenance easier.

For instance, the systems’ new separator design not only provides an oil reservoir that helps reduce pressure drop but includes a hinged top plate and only one integrated seal, too. As a result, o-rings do not need to be removed and then fitted again during maintenance work.

Like previous models, the new compressors feature the Delcos XL touchscreen controller, a visual means of monitoring the operating parameters of the compressor.

An efficient IE3 electric motor comes as standard with these systems, however there is the option of upgrading to an “ultra-efficient”, energy-saving IE4 electric motor if required. The units are capable of delivering pressure ranges from 5 to 13 bar, and volume flow between 2.1 to 14.03 m3/min.

Guru Kabad, Product Leader, singled out the Assure warranty on airend. “We are so confident in the quality of the airend’s components and the design of the airend itself, which – as the heart of the compressor – is so important, that we are willing to offer a ten-year warranty on this. No other compressor brand in the market offers an assurance like this.”

He also stressed the cost saving benefits of the range. “Our research has shown that a 75 kW regulated speed system running at 7.5 bar, for instance, can help save more than €5,000 (about R88,000) compared with our older models, and more than €6,500 (R109,000) a year compared with some competitor models.

IN recent years the demand for outsourced steam solutions has grown significantly as steam-reliant businesses continue to look for ways to reduce their costs,...
Read more
HVAC

MOST cooling and heating system failures happen because of the same mistakes or oversights. Anelia Hough, water treatment consultant at Allmech, says that in...
Read more
HVAC